For their final tour together we are honored to bring this concert to Peterborough, NH.

"Garnet Rogers is a brilliant songwriter. One of the major talents of our time." -Boston Globe
"Archie Fisher's quietly poetic ballads haunt like a shadowy specter" -St. Paul Pioneer Press

Hailed by the Boston Globe as a "charismatic performer and singer," Garnet Rogers is a man with a powerful physical presence--close to six and a half feet tall--with a voice that resonates just as deeply. With his "smooth, dark baritone" (Washington Post) his incredible range and thoughtful, dramatic phrasing, Garnet is widely considered by fans and critics alike to be one of the finest singers anywhere. His music, like the man himself, is literate, passionate, highly sensitive and deeply purposeful.

A master guitarist, singer and songwriter, Archie Fisher is Scotland's foremost Folk music troubadour. He is known in his homeland for a 27-year tenure as the host of BBC Radio Scotland's award-winning "Travelling Folk" show. Recognized for his contributions to Scottish folk music, he was inducted into the Scots Traditional Music Hall of Fame and in 2006 was awarded an MBE (Member of the British Empire), a prestigious honor nominated by his peers and bestowed by Queen Elizabeth. 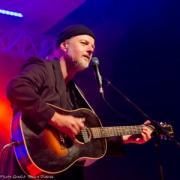