Originating from a chance meeting at a Boston folk club open mic night in 1971, Aztec Two-Step burst on the scene in ‘72 with their self-titled debut album on Elektra Records. Their first album and three subsequent albums for RCA Records made the duo staples of progressive FM and college radio, helping to usher in the folk/rock music of the 1960s into the 1970s and beyond.

Rex Fowler, along with his partner Neal Shulman, spent a lifetime making music together. However, after 47 years of recording and non-stop touring, Neal has retired. In this new era, Rex continues to expand the legacy of Aztec Two-Step's music as he introduces his New Band Members:

Dodie Pettit: Acoustic & Electric Guitars, Keyboards, Vocals
Songwriter, recording artist and theatrical performer, Dodie had a distinguished 15-year career on Broadway, which included being an original cast member of The Phantom of the Opera. She also appeared in two other Tony Award winning musicals CATS, and "Titanic." Dodie and Rex first met when she was a session player and singer on ATS’s album,“ Time of Our Lives” (1980). Her recent solo CD releases include "Songs From The Journey", "Playin' With The Boys", "In My Own Voice", and "Long Road."

Rex & Friends have been touring with the Aztec Two-Step catalog to rousing fan reviews:

“You made my day! The show with Rex and Friends in Sarasota was fantastic! Look forward to seeing you again.”

“Great show at City Winery. Will always miss Neal, but Rex’s new configuration maintains the integrity of the ATS music that fans love and also brings in some new directions.”

“Amazing show at the Courthouse... Classic Aztec with a twist. Go see Rex, Dodie and Muddy. You won’t be disappointed!” 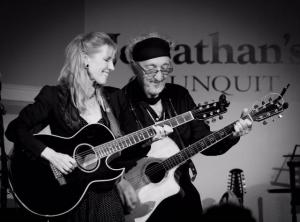