Lula Wiles is a band deeply rooted in traditional folk music, but equally deep is their devotion to modern songcraft. They deliver love songs that are at once defiant and heartsick, as well as new contributions to the folk ballad canon and timely explorations of what it means to live in America today. Drawing from the deep wells of traditional old-time and bluegrass, classic country, and contemporary indie-folk-rock, Lula Wiles melds diverse influences to create a harmony-driven sound all their own. The three band members deftly swap instruments and frontwoman duties, with Ellie Buckland (vocals/acoustic guitar/fiddle), Isa Burke (vocals/acoustic and electric guitars/fiddle), and Mali Obomsawin (vocals/acoustic guitar/bass) each contributing singularly expressive vocals, instrumental lines, and songwriting. Onstage, the band gathers tightly around a single microphone for a spirited and emotionally resonant live show, anchored by their powerful three-part harmonies. Currently based in Boston, Lula Wiles released their debut album in May 2016 and their sophomore album, “What Will We Do” will be released on Smithsonian Folkways on January 25th, 2019.

"This album is a stunning collection of self-penned songs about love, loss, and drinking – the perfect blend of modern and timeless. From rich swells of fiddles to powerful honky-tonk guitar, all anchored by rocking bass, this album delivers one gem after another. In an age where so much music feels trite and phoned in, Lula Wiles emerges with their own unique blend of honest lyrics and gorgeous singing. Do yourselves a favor and listen to this record. Or better yet, see a live show." – Aoife O'Donovan

"With one whispered harmony, new Boston-based trio Lula Wiles can stop you in your tracks. Their debut release has a mesmerizing charm, filled with songs that hearken back to the classic era of folk and country." – Mayer Danzig, Twangville

"A delicate balance between feverous passion and harmonious light and charm and grace... It's organic and raw in a way that is honest and real… It's just plain beauty incarnate." – Red Line Roots

For much more about Lula Wiles - http://www.lulawiles.com/ 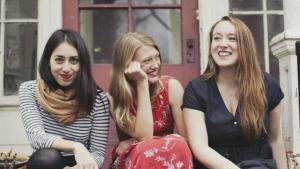