“What sets The Steel Wheels from the Blue Ridge Mountains of Virginia apart from many bands is the combination of their stellar instrumentals, accentuated by the one of a kind lead vocal of [Trent] Wagler, and keenly supported by strong harmonies. Eric Brubaker on fiddle, Jay Lapp on mandolin, and Brian Dickel on bass weave in and out intricately throughout this record, painting vivid imagery which flows effortlessly, just teasing the lyrics enough to allow them to resonate within you.” - Country Standard Time

Wild As We Came Here, 2017
Hailing from the Blue Ridge Mountains of Virginia, The Steel Wheels are familiar with the traditions of folk music and how a string band is supposed to sound. In fact, they’ve been drawing on those steadfast traditions for more than a decade. Yet their name also evokes a sense of forward motion, which is clearly reflected in their latest album, Wild As We Came Here.

“I think we’ve always been able to write new songs with different landscapes. However it was really enjoyable for us, creatively and artistically, to depart from the straight-up acoustic sound that we’ve been known for,” says Trent Wagler, who plays guitar and banjo in the band and writes most of the material. “I’m excited to see what happens. There are fans out there who are ready for this and who have been waiting for us to do this.”

While on tour supporting Josh Ritter, the band forged a friendship with Sam Kassirer, who plays keyboards for Ritter on tour and has produced a number of his albums. While The Steel Wheels had been considering other producers and maybe recording in Nashville, they chose to follow their instincts all the way to rural Maine, where Kassirer owns a recording studio inside a renovated farmhouse from the 18th century. All four band members – Wagler, Eric Brubaker (fiddle), Brian Dickel (upright bass), and Jay Lapp (mandolin) – hunkered down for a week and a half to create Wild As We Came Here.

Continue….. at their web site https://www.thesteelwheels.com/home 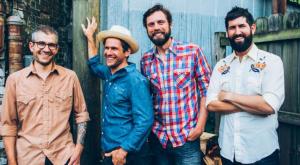